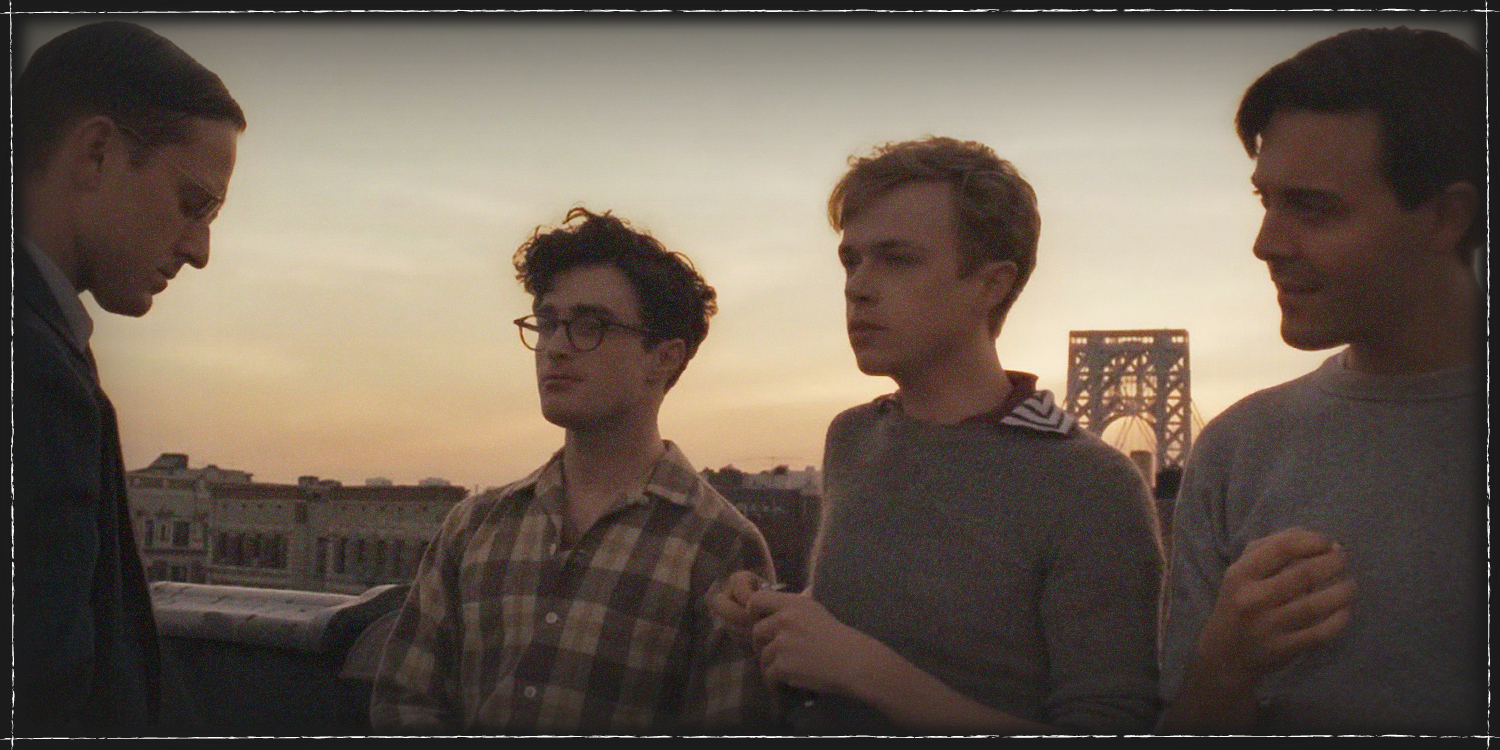 Early ‘40s. In Europe, American soldiers support the allies in the fight against the Nazis. Back home the newly invented term “teenager” gradually dominates popular culture marketing the dreams and lifestyle of American youngsters.

At the same time a group of young writers in Columbia University try to rise above all that. They declare war “against the fascism of the rhythm and meter in poetry” and delve into a “new vision” of life and writing. These are the people that set the milestone for the “Beat Generation”.

Allen Ginsberg, Jack Kerouac, William Burroughs and Lucien Carr began to explore the limits of art, sexuality, society, self, drugs and life to create an original counterculture in American literature. Their lives and work were so intertwined, that any attempt to narrate a story about each of them should simply include all the others. And this is exactly what “Kill your Darlings” does in two parts.

What in the beginning seems to be a film about Allen Ginsberg and his journey from troubled childhood to literary adulthood, ends up as the aftermath of his and his companions’ interactions with each other and goes on to show a series of complicated consequences with one charismatic and controversial person, the man who later becomes the main character in their famous works: Lucien Carr.

“Finally an oasis in this wasteland” he says when he meets Ginsberg in Columbia University Library, casting an unbreakable spell on him. The shy, inexperienced freshman, who is trying to define himself away from his complicated relationship with his mother, is well caught in a charming net of art, sex, drugs and jazz. His whole personality is lit up. Life is suddenly infinite and the world a wonderful place. Frenetic jazz rhythms, an overwhelming “beat feeling”, quick changes between places and people, wired recitations of censored poems, wild reactions and an urgent lust for life lead Ginsberg to an intriguing journey of self-discovery and sexual awareness.

And when does that “wild ride” stop? The moment when Lucien Carr, the master moving his friends as pawns on this chess board of poetry, sexual awareness, life and love decides to remove the “king” when he unwillingly ends his manipulative relationship with the literary trio after murdering David Kammerer, one of William Burroughs’s friends who had an obsession with Lucien and haunted him, according to the latter’s statement. Or his long term lover and “guardian angel” according to Allen Ginsberg’s “Bloodsong”.  This event marks the turning point for a feel-good companionship who lose their up-tempo rhythm of life to eventually become a group of separate individuals. Ironically enough, this becomes the major incident that unites all of them together forever. It inspires Kerouac to write ‘’the town and the city”, “Vanity of Duluoz” and with William Burroughs , unpublished until November 2008 “And the hippos were boiled in their tanks”.

While feel-good atmosphere of quick jazz tunes dominates the first part of the film and John Krokidas skillfully allows spectators to get carried away to a subtle exploration of an era, the birth of a culture in American literature and life the film’s narrative maintains an essential balance around Allen Ginsberg’s sexual orientation where this is never made an issue, but is rather in the context of Ginsberg’s general coming of age.  Krokidas introduces an original and very interesting perspective miles away from any clichés and exploitative approaches that could have easily been applied here.

However, the film’s extensive focus on the first part of the writers’ coming together leaves it slightly unequal. Even if the events that followed Kammerer’s murder have been widely known through the majority of the “Beat” writers’ books, and thus the director’s intention is understandable, there is a feeling that the film rushed towards its end leaving it distinctively separated in two parts.

Daniel Radcliffe as Allen Ginsberg delivers a measured performance in perfect alignment with the spirit of the freshness and polite shyness liberally sprinkled with optimism, typical elements of the ‘50s.  Dane De Haan (Lucien Carr) however is the hidden gem. He is the subtle, stable, robust power that carries that film to the end. From his seemingly innocent early days at Columbia University to his stabbing his lover to death, Dane De Haan guides us to an apocalyptic journey of personal redemption.  His performance, infused with the true “beat” spirit brings not only one of the most intriguing book characters to life, but also brilliantly connects all the pieces of the film together resulting in generating the film’s genuine identity.