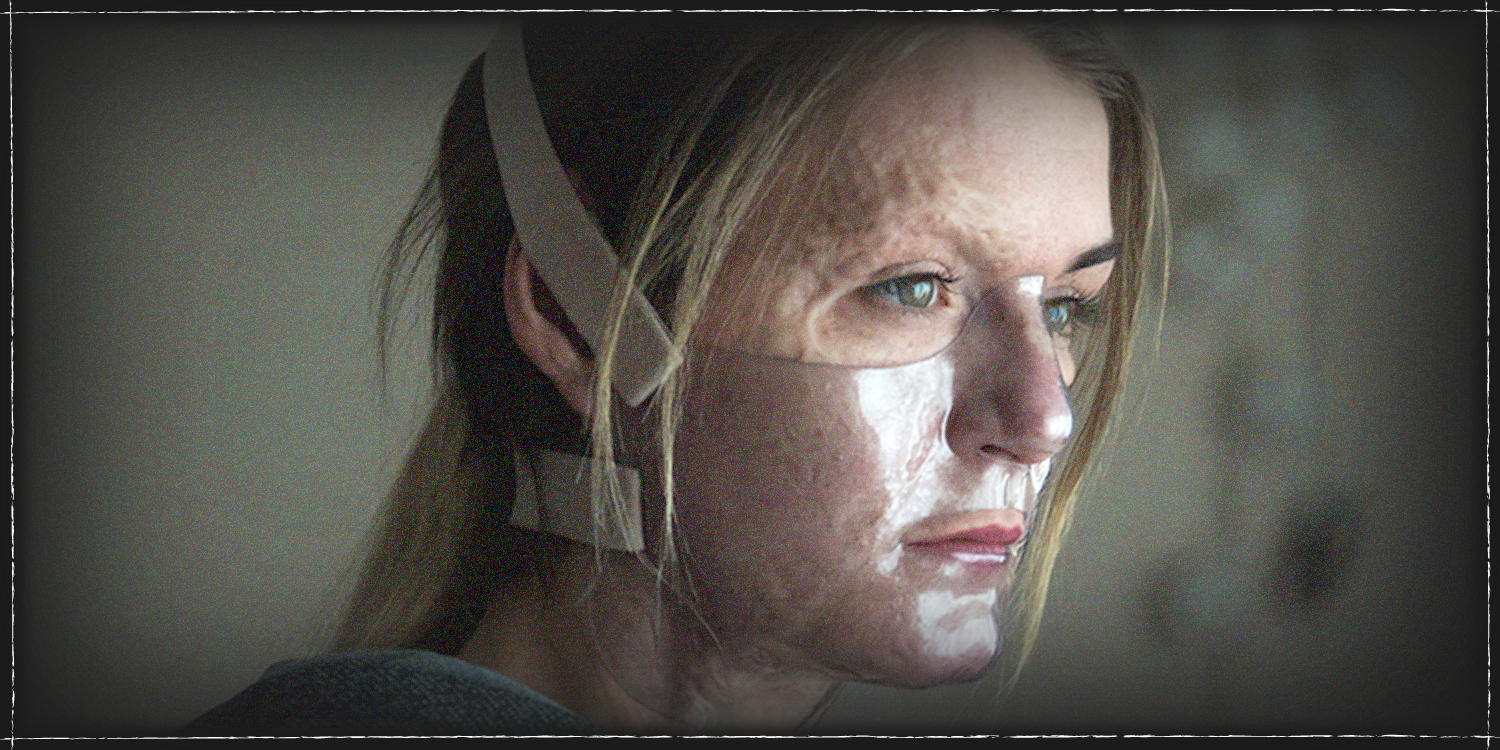 There's a scene in Dirty God when the protagonist, 23 year old single mum, Jade, on a break while working at a call centre, tells a work colleague that her baby daughter, upon seeing her disfigured face began calling her, "Monster... monster..." to which the child's grandmother added, “But she's a nice monster”. This is the foundation of this well-crafted film by Sacha Polak.

Jade has finally been released from the hospital where she spent a considerable amount of time recovering from the acid assault that disfigured her features. A new world beckons, beginning with the initial journey back into her native east London, photographed to make it appear as though she were returning home from prison, viewing her old community through the prism of a car window, trepidation and restrained bewilderment reflected on her face covered by a protective mask. She must first reintroduce herself to her baby daughter: it's a telling and immediate rejection. This foreshadows her future, re-igniting friendships, the almost guilty exchanges becoming almost too painful to watch. Her best friend, Shami, wonderfully played by Rebecca Stone, caringly helps her apply makeup before going clubbing, telling her the ordeal will soon be over with the upcoming sentencing of her perpetrator, ex partner and father of her child. But somehow we know that the opposite is more apposite.

It’s hard to fight the growing indignation when one imagines how such an assault, not shown in the film, could be carried out by one person against another. How a person could knowingly condemn another to such an appalling fate? The 2008 case around celebrity model and activist Katie Piper springs to mind. One of her attackers recently left prison after nine years behind bars. He can move to another city or another country and assimilate himself into the local population. But the victims of such callous acts bare their scars for all to see forever, and wherever, left to deal with what can be understood as a prejudiced, misogynistic and hegemonic ideal of beauty.

Afraid to go out, she cuts a tragic figure of a lonely young woman craving intimacy, spending much of her time on the internet casually flitting between virtual hook-up sites and glamorous pictures of models, eventually falling on an advertisement for facial surgery abroad. Jade then chases her dream of skin surgery against the advice of doctors and her mother. Her determination is absolute. She gets a low paid job, but quickly finds it doesn’t pay enough to help her. So she steals the money from her own mother and flies to Morocco for the surgery, only to discover that the clinic to which she paid the money does not exist. Her quiet acceptance seems like another slap in the face-the attack all over. But somehow, sitting in that desolate sun-kissed, bleak and dusty housing estate, she sees it as just another hurdle for her to overcome.

The various scenes of this bright, attractive young woman examining her damaged skin, how it feels to the touch and its sensitivity were heart rendering. “Snake’s skin”, she says to a former beau as he caresses her. “Soft”, he says gently, “Very soft”, this clearly was a moment when he got close enough to see below the surface of her outward features, as referenced by the innocence of babies, who only see a mother, the message that pervades the film.

Newcomer, Vicky Knight’s performance is a devastatingly honest portrayal of more than just the victim of a serious acid attack. She represents humanity’s struggle of survival and in particular, the life of a special person cast as an outsider. Notwithstanding the fact that the actor, herself had to come to terms with her own journey as a burns victim, it is her thoroughly authentic portrayal of the human spirit that transcends the personal and evokes the universal.

The script by Sacha Polak and Susanne Farrell is well-balanced, bold and contemporary- although at times, clipping the edge of parody in its depiction of some of the supporting players- in a structure that certainly hones into the central character's psychological dilemma. Polak’s direction is clinical rather than spectacular, clean and discernible, but her relationship with her lead actor is entirely evident, seemingly bursting through the screen. Brilliantly photographed in a vivid naturalism, the dowdy estate in rundown London and the poor, dusty Moroccan hamlet by a windswept desert looked almost palatable. However, the occasional hallucinatory scenes of Jade's ex-partner, loosely layered in bird's feathers, caressing and simulating sex with Jade, felt a little ham-fisted. Despite this, this movie proves to be a solid undertaking, well supported by an energetic and authentic young cast, but it is the striking star turn of Vicky Knight that stands out, a quiet but steely representation of us all.

Dirty God is released in Cinemas in the UK on Friday 7 June, 2019. More information about screening times and cinemas, following the link: https://www.modernfilms.com/dirtygod