Carla Simón’s semi-autobiographical second feature film bears the name of a rural city in Catalonia, the aroma of ripe peach orchards, the picturesque vistas of fertile countryside and the nostalgia of an organic paradise which has not been fully explored yet is on the brink of becoming a vague memory.

Bittersweet and tender in its own matter-of-fact way, the film emanates an unrivalled sense of joie de vivre associated with the enthusiasm and limitless possibilities of all those long, hot, sunny days of summer accompanying the quotidian activities on the Solé family farm. Filled with appropriate tones of subtlety, sensitivity and observational neutrality, the film cleverly avoids growing into a didactic, or morally instructive pastoral tale about a way of life which is currently being threatened with extinction. Rather, it allows the story to grow, ripen naturally on screens and in our hearts. At the same time, Simón carefully plants appropriate seeds to raise awareness over the challenges intertwined with a current reconfiguration of the agrarian landscape in Europe, due to the rapid expansion of the industry of renewable energy. Winner of the Golden Bear at the 72nd Berlin International Film Festival and recently screened at the 66th BFI London International Film Festival, Alcarràs establishes Carla Simón as one of the promising and talented female filmmakers of her generation.

Slow burn, Alcarràs unfolds in the pace of those scorching summer days, with eloquent mise-en-scène consisting of warm, natural light, and long shots of the picturesque Catalonian vistas. The film opens with the enthusiastic, irrepressible force of 7-year-old Iris, played by Ainet Jounou, joined by her cousins in an old, abandoned family car-turned spaceship for their mission to reach the sun. Not long after they get a view of Mars, they have to abandon ship, and watch it being taken away by a huge crane. Their spaceship is being repossessed and the space it occupied is being cleared so that solar panels can be installed at the end of the summer season. The three cousins run through the peach orchard to the family house in search for answers by the powers that be, only to find said powers, that is, Iris’ father, mother, aunt, uncle, and grandfather Rogelio going through paperwork and having a heated exchange. Papers are flying around, an eviction notice is mentioned with Quimet, Iris’ quick-tempered father, being clearly upset, her mother’s calm demeanour being challenged, and their usually self-assured, dignified grandfather being obviously embarrassed. 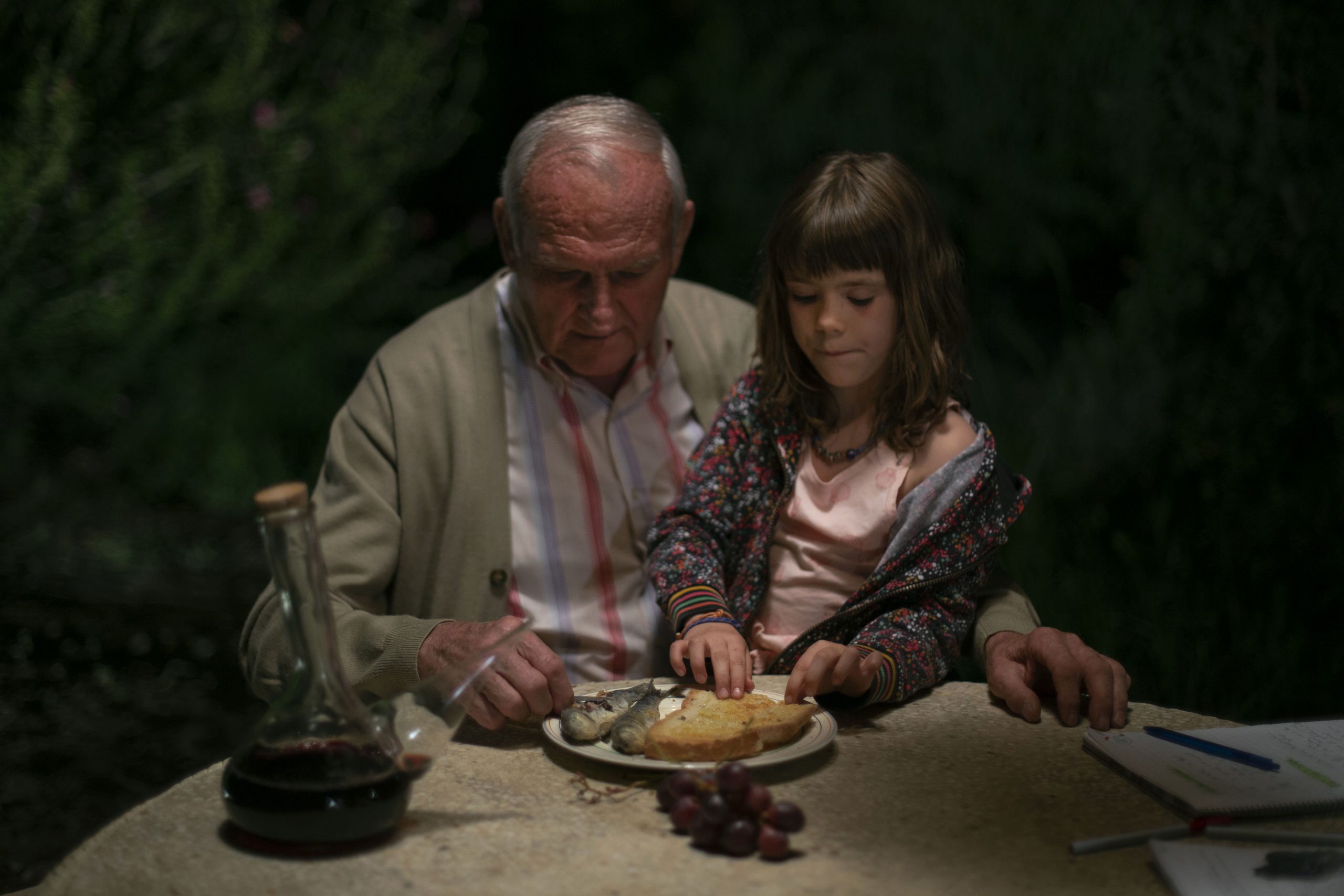 While things gradually calm down, the seed of discord and disagreement seems firmly planted among family members and “The Pinyols” surface as fleurs du mal. The root issue being the decision by the latter to stop honouring the deep, loyal friendship and close bond which had been connecting the two families for decades, dating back to the Spanish civil war. The Solè family had helped the Pinyols during the war and have ever since been leasing the farm from them based on a verbal contract. With new, younger family members managing the business affairs of one the largest landowner families in the region though, new rules are in place and the family’s past connection to the land and the Solè family, are revisited. The young Pinyol has an eviction notice issued and the Solès have to abandon the land by the end of summer. This will be the last time they pick up their crop as the land will be repurposed and covered with solar panels, following the latest trend in agriculture taking the wider region by storm.

Feelings of anger, resentment, and despair are built up equally among the Solè family and the farmers of the local cooperative. They are divided between the ones who wish to continue cultivating the land in the way they’d always have, despite barely making a living, and the ones who contemplate switching their crops to artificially renewable produce, grown and cared for by solar panels alone. A rift is caused both in family and community life and the dilemma they all face casts a heavy shadow over gatherings, the local summer faîte, carefree time as well as quotidian routines. Rather than a requiem for a paradise about to be lost among discarded produce though, the film subtly honours all the weeds, which have influenced the Catalan society in many ways ranging from the post-civil war era to present divisions without glossing over difficulties and challenges. With Simón’s approach being simultaneously expressive but measured, considerate, tender but not involved, the film seems to emerge directly from the ground up. It is what it is, and it is incredibly beautiful; something that needs to be seen and felt rather than put into words. It grows, blossoms, and expands emitting a fresh, revitalising scent lingering in the air for a long time until it evaporates naturally.

Ironically, the foreseeable conclusion to the story comes as a surprise, not due to the lack of momentum being built up but mainly due to the stoicism which Simón chooses as the main ingredient in the style of the entire film. Her gaze is not touristy or voyeuristic, presenting an idyllic or romanticised version of the farm and a way of life which is long gone. Rather by focusing on the quotidian she allows spectators to get acclimatised to a set of premises, elements, way of life while allowing alternative but also unexpected views, results, outcomes, to spring out of mundane routines, chores and repetitive activities. It is expected that the organically grown, colourful and delicious tomatoes that Rogelio’s grandson grows alongside the figs that sustained both the Solés and the Pinyols during the war, will be underappreciated when brought as a gift to the landowner. Nevertheless, Rogelio and his granddaughter choose to make the kind gesture. It is expected that the farmers’ protest against the humiliatingly low price they are offered for their organically produced crop will not result in change. However, they choose to use all means available to them to fight the possibility of being forced to swap their orchards for a piece of land populated with solar panels which may arrive with interesting financial incentive. There is a notion of urgency to avoid the pitfall of feeling the helplessness on both occasions, as it might in fact be the very last time Rogelio, his grandchildren and all the farming community get to break their routine with those actions, as that very quotidian routine will go extinct quite soon. While they all try to preserve the overlapping and cross-pollinating natural ecosystems comprising plants and produce, the animals and species forming communities around the farms and the humans caring for the land, doing the same, an in their own way, they have no other option but to accept their disintegration and dissolution. 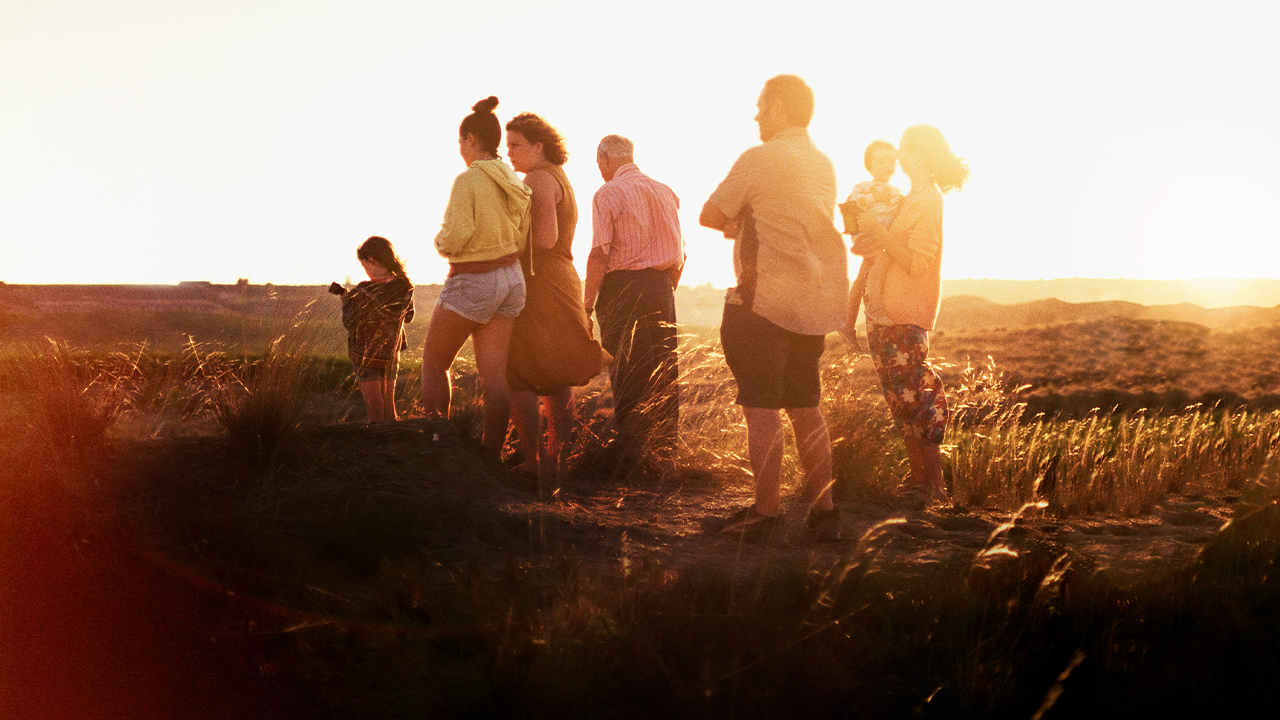 There is a particular rhythm bound to the natural, almost observational way in which Simón chooses to approach the characters, their connection to the land and soil; their connection to one another and their community; their connection to their past, present, and possible futures relating to farming, politics and the economy. There is softness, sensitivity and tenderness in her matter-of-fact approach; a naturalistic depiction of a cause-effect continuum shown with genuine care and affection towards the people, place, produce and soil. And it is in that uncompromising authenticity that Simón’s film immediately strikes a chord in spectators’ hearts. The fat of the land, the warmth, nourishing, organic way of life which is in close alignment with the natural ecosystems are there until they are not there anymore.

Drawing on her own personal connection to her subject, as Simón herself comes from a farming community in Catalonia, the talented filmmaker maintains this fine balance between measured sentimentality and the authentic sensitivity in the way she approaches the subject matter. At the same time the vibrancy and spontaneity of a cast of non-professional actors eases viewers to the story of the Solé family, their hidden past, troublesome present and uncertain future. Her choice to cast a majority of local, non-professional actors give the story a sense of verité with a twist; everyone experiences their own truth and bring their personalities to the table adding something interesting to the style of the film. A special mention needs to be made at this point to the effortless performances of all cast members who contribute majorly to the verisimilitude of the story. The journey of the grandfather of the family, Rogelio, in particular who is played by Josep Abad, is indicative of the slow, disintegrating process of changes in the farming community.  A local Catalan farmer himself, Josep Abad is remarkably dignified throughout the film, pridefully hiding his pain caused by the betrayal of his family friends, the loss of his life’s work and accomplishments, the divisions caused in his family. More than a trigger for inter-generational conflict among family members though, Rogelio acts as the catalyst for wider themes to emerge, primarily around changing conceptualisations of the natural and agricultural ecosystems as well as the socio-political impact of a rapid expansion of the industry of renewable sources of energy.

There are some elements in the film which are reminiscent of Alice Rohrwacher’s exquisite Happy as Lazzaro (2018), a whimsical tale presenting the story of local farmers being suddenly expelled from the eternal community of Inviolata. While the former seems to focus primarily on a more symbolic expression of a community and way of life which is only existing in memory, Alcarràs feels almost as its realist interlocutor, documenting, as it were, the decisions, changes and gradual disintegration of a particular way of life. Far from a pessimistic or negative approach though, the film sides with life; the natural, organic progression of things growing and evolving and the lingering enchantment of all those which have fallen off on their own. And this life force, which the film encompasses and manifests on many different levels, becomes one of the most important components in this film, making it an exceptional piece of work which can only indicate what Carla Simón can achieve next in her career.