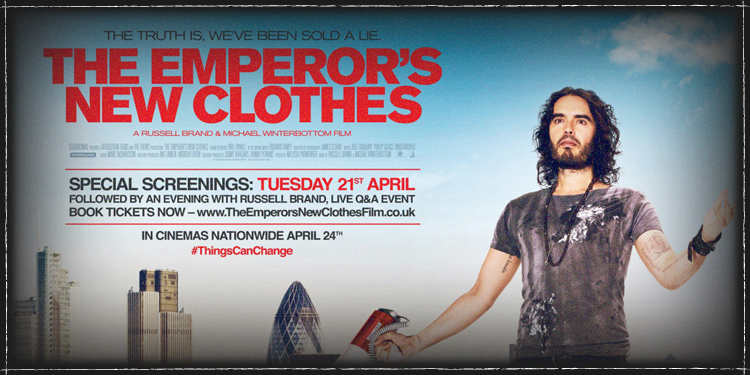 Okay, so you begin watching amidst a cloud of disdainful curiosity. It’s not long before the odd chuckle sneaks out. Then a quick glance round the auditorium at the attentive, hopeful faces. Back to the screen- that face.

All of a sudden you find yourself subtlety sucked into his mile-a-minute world, gurning at the injustice of students deliberating on how much debt they will have accumulated by the time they graduate and grinding your teeth at the bankers who freely oversaw a global economic meltdown that has and still is squeezing the life out of the working masses.

Examine the conscience of any artist, from Michael Angelo to Robert de Niro and you will find at their core, a raging fire. It is a heat source that cannot be diminished by criticism or indifference. And with them all, regardless of how you see their work, audiences, protractors and detractors alike can never turn away from their creative output. In The Emperor’s New Clothes, you will find many similarities to American Agent Provocateur Michael Moore’s films, the ‘lone wolf’ agitator taking a dig at the big guns. But here Brand’s force of personality drives the film from start to finish, promulgating his simple message of justice for the working and middle classes.

His interactions with the ordinary man and woman comes easy- too easy. One certainly would struggle to conjure up an image of the rotund American Michael Moore slipping through the barrier at a London tube station or scaling scaffolding outside the multi-million pound Hampstead home of a banking executive to display a ‘Pay Your Tax’ banner. Deconstructing Russell Brand’s film from the stranglehold of the docu-shock-mockumentary genre leaves at its best… well, heart. Its progenitor, say what you like about him: a dandy, pea cocked lothario, show-off, champagne socialist whose career gilds the stages of celebrity is, dare I say it- something of an artist. And a political one at that.

The loose narrative sees Brand take us back to his humble Essex past to witness how things have changed since Thatcherism… corner shops have become betting shops and small local grocers are replaced by supermarkets. The finger for this corporate makeover is pointed firmly at the neo Conservative Capitalist doctrine that takes no prisoners. This raises the opportunity to send the Jesus-like, comedic chameleon into a frenzy of frantic and ultimately unsuccessful attempts at waylaying executives from a number of high street banks- their invisibility the point Brand is trying to make. Who are those that would make wealth at the expense of the proletariat and then- the knife in the back- don’t even have the decency to pay their ‘Tory backed’ reduced taxes from escalating wage packets?

A little rough round the edges the movie may be but what it lacks in content it surely makes up for in charm and bravery. And one should not underestimate the quiet cinematic crafting from the imaginative film director Michael Winterbottom with his clever use of archive and graphics to complement the spattering of professional comment from the likes of Paul Mason of ‘Why It’s All Kicking Off Everywhere’ fame.

The Emperor’s New Clothes is far from being a great film but nevertheless deserves its place on the silver screen, particularly in the current political climate and I can certainly recommend it for sheer spunk and character. As for Russell Brand, framed by a mass of hair, teeth and charisma, his honest, brutal and fractious belief in what he espouses brings the movie off.